Bisu hails from the Indian city of Kolkata. A Commerce graduate from the University of Calcutta, he had been practicing yoga asanas since young, but it was not until after completing his graduation that Bisu became fully dedicated to yoga due to some unexpected turn in his life. He refers his coming to Yoga as his “destiny of karma”. Bisu went on to complete numerous Yoga courses until he obtained a Masters in Yoga Science from the reputed SVYASA University, India.

During his 13 years of yoga teaching experience, Bisu has taught in Universities, colleges, medical institutes and in the aftermath of natural calamities such as the 2004 Indian Ocean tsunami. Bisu’s primary focus is using therapeutic yoga to cure people suffering from psychosomatic ailments and he feels the greatest contribution of Hatha Yoga to mankind is its therapeutic benefits and he aims to promote this worldwide. Over time, Bisu has become a seasoned Yoga therapist with his years of hands-on experience in curing various ailments faced by urbanites.

Bisu has been teaching in Singapore since 2009 and has directly or indirectly influenced and inspired many Yoga teachers. Bisu’s classes are known for their calm and deep practice ethics, and he encourages students to develop their own motivation to practise sincerely. For serious practitioners of pranayama and meditation, he also conducts combined pranayama and meditation classes Singapore at regular intervals. Click here to read more about Bisu’s credentials, specialisations and testimonials. 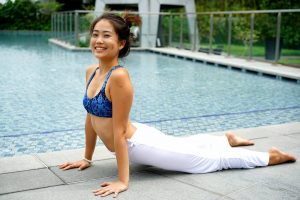 Fortunate to be introduced to Yoga at a young age of 17, it has kept her going throughout difficult times in college and at work. She had a taste of peace, and wanted more.

Her curiosity led her to many parts of India, and in Paramanand Yoga Institute of Science and Research, Indore India, she studied Traditional Yoga and witnessed many people who could not be healed by modern Western medicine got relief from common ailments like slipped disc, cervical spondylitis, migraine, diabetes and such through Yoga therapy.

“The more I journeyed outwards in search of answers, the more I realised that the answers were always and have been within. We are always looking for things outside to make us happy, when all that can truly make us happy is inside. The art of happiness is simple, one have to just learn how to Be. Discover within yourself, that you are complete. When that happens, you will also achieve total health – physical, mental, social and spiritual health.” ~ Krisa